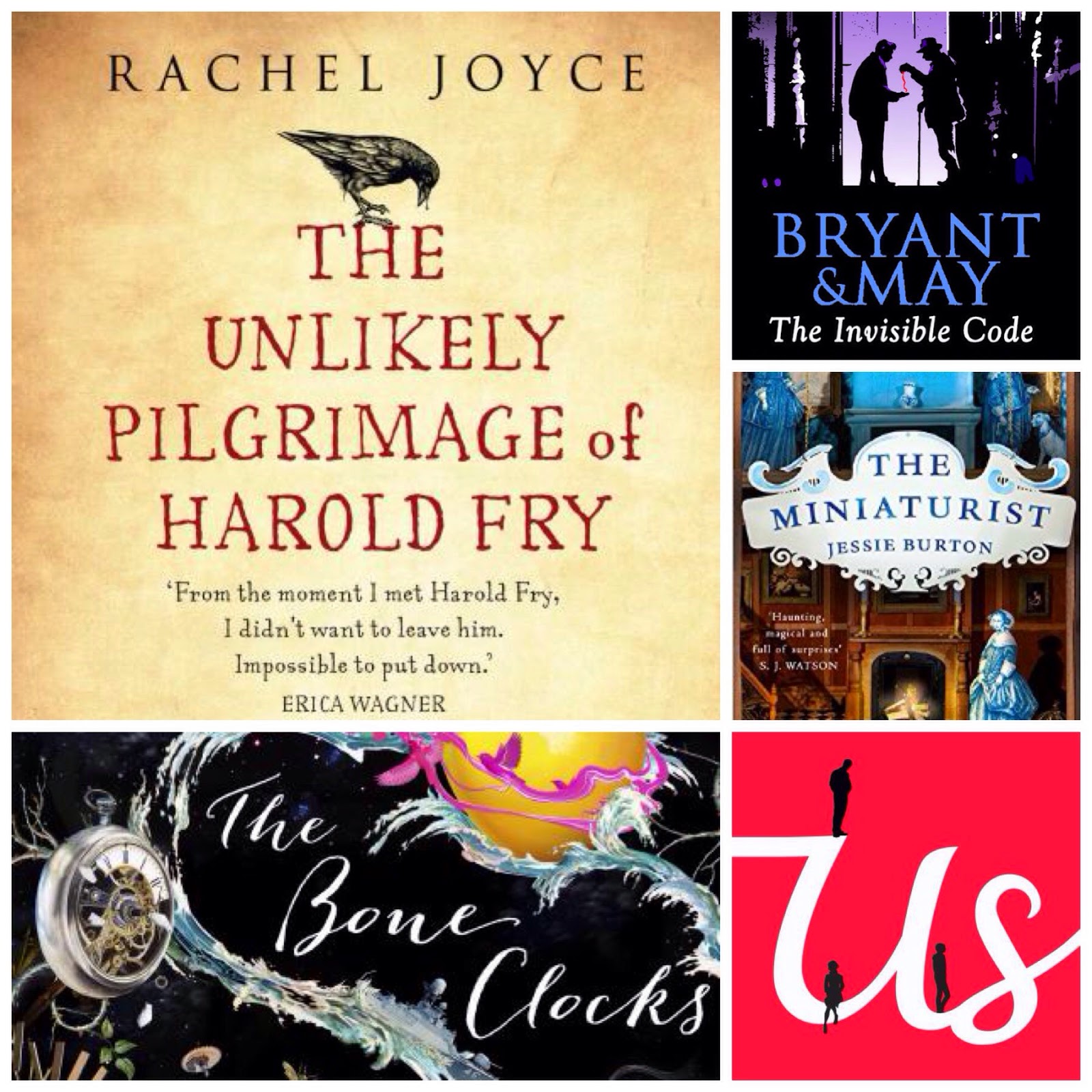 ... aka, What I Do When Other People Sleep (Other Than Breastfeeding, That Is).

Well, there was me thinking that I'd have no time for reading with a newborn (now 5 week old) baby.

I'd clearly forgotten all those wonderful hours between sunset and sunrise when lazy people lie in their beds and sleep. Sleep! Who needs it? Surely a better way to while away those very same hours- other than by feeding a CONSTANTLY hungry baby of course- is browsing Facebook hang on playing solo games of Words with Friends I mean browsing shops online for things I can't afford and don't need no, wait, what was it?

So, here are five of the books I've managed to get through in those wee small hours in the last five weeks. There's nothing revolutionary; mostly they are culled from everyone else's best of 2014 lists.

I liked One Day, I didn't much like Starter for Ten (though to be fair I didn't actually finish it). But I really enjoyed Us. It's a book about parenting and how hard it is to get it right, and about a marriage breaking up; and yet despite the sombre themes it still manages to be funny. The image of the main character supergluing his son's Lego sets together because he got so irritated that his son refused to build them properly sticks in my head as something both hilarious and tragic (and frightening- do I see a bit of me in there?!)

Somehow missed this when everyone else read it, but it's a lovely book. Another one about the perils of being a parent* it's a meandering, surprising, life-affirming sort of book, gentle and engaging. Really enjoyed it.

Set in Amsterdam in the 17th century, I wasn't sure about this in the first couple of chapters; it seemed gloomy and a little slow. But it ended up being gripping and involving and very memorable. Still bloody gloomy, mind. And with a small caution for anyone about to embark on childbirth.

I loved Cloud Atlas, and thoroughly enjoyed Number9dream and Ghostwritten. The Bone Clocks doesn't disappoint, but I'm not sure it quite matches my love of those novels. The characters are fabulous, the individual, apparently unrelated stories absorbing, but the sci-fi/ fantasy element didn't quite do it for me this time. I'd still rather read an average David Mitchell book than anyone else's best attempt though.

5 : Bryant & May and the Invisible Code - Christopher Fowler

I'm a sucker for any books set in cities I love (hello, Ian Rankin), and particularly those that tap into the history and stories behind the place. The Bryant & May series, set in London, do exactly that. I get frustrated at the descriptions and backstories of the main characters being repeated in every single *yawn* book (I assume for the benefit of anyone reading them as one-offs), but the mysteries they investigate are always gripping. They begin with a crime that seems to defy any earthly explanation, then slowly unravel into something complex and clever but usually very much earthbound. (Ben Aaronovitch is another favourite in a similar- but definitely not entirely earthbound- vein, and I have just finished and enjoyed Foxglove Summer, the fifth in his Rivers of London series. It's not actually set in London, though...)

I've also read Jenny Offill's Dept of Speculation (interesting but ultimately not my cup of tea) and Robert Galbraith aka JK Rowling's The Silkworm (very enjoyable). And I'm embarrassed to say I'm in the middle of one or two others that for various reasons I have temporarily abandoned. But five books on my list to read next are:

2 : The Colour of Magic - Terry Pratchett (and the rest of the Discworld books- can't quite believe I only ever read Mort- and Good Omens, if that counts- and somehow never got round to the rest. Sorry, TP, and RIP)

4 : Do No Harm: Stories of Life, Death and Brain Surgery - Henry Marsh