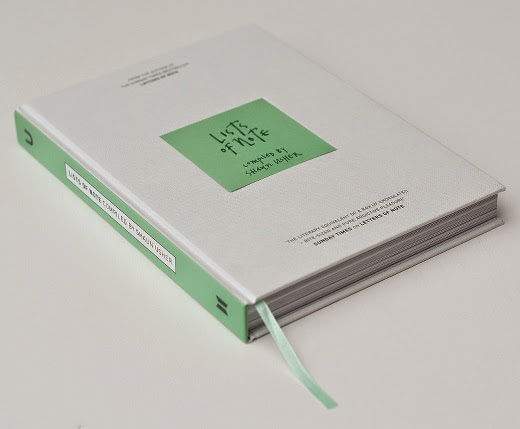 It's a short post this week, partly because it's the school holidays, and partly because I am trying to keep my eyes open without the aid of matchsticks. Whilst I totally accept that in becoming a parent sleep and I are not going to be as well-acquainted as we once were, I still struggle with it. A nice, unbroken night's sleep and I feel like I can take on the world- or at least greet a tantrum with a calm manner and a beatific smile. But the last week has consisted of nights interrupted by coughing, the child on the inside doing somersaults, and the child on the outside waking between 4.15 and 5.30 (though this morning, hurrah, 6.15!) either screaming (uh oh, I think the nightmares have begun) or just very ready to get up now, thanks.

Anyway, enough of the inevitable/boring I NEED SLEEP tangent. I discovered the existence of this book this week- Lists of Note by Shaun Usher, which I've yet to get my hands on (Christmas present, anyone?) but have read a sneaky sample on the Kindle. Definitely not a book for reading on my iPhone, I'd say, judging by how beautiful this looks. It includes the shopping list of two 9th-century Tibetan monks, Johnny Cash's list of things to do today, one French novelist's attempt to record every single thing he ate and drank for the duration of 1974 (somewhat different to my diet. Suddenly my arteries feel less clogged) and many more.

So it seems only right to borrow the list that opens the book: Usher's reasons for our reliance on lists. He puts it much more eloquently than I could hope to do.

1 : Life is chaotic- often unbearably so. The ability to divide some of that chaos into lists, to make the onslaught manageable, can bring much-needed relief.

2 : Human beings are fearful of the unknown and as such have a real need to label and group things, to assign them to comfortable lists.

3 : Lists can make us more productive and can eradicate procrastination. Nothing on earth, resignation aside, cuts through the thick fog of a daunting workload as effectively as a to-do list.

4 : Everyone is a critic. Ranking things- best to worst, biggest to smallest, fastest to slowest- can be strangely addictive, no doubt because it make us feel knowledgeable.

5 : Time is precious. Distilling hugh swathes of monotonous information into easily digestible lists ensures that we have more time to enjoy ourselves and make lists.

I'd add one, personally. Without my armoury of lists, and with a brain softened by pregnancy and-yep, you guessed it- a lack of sleep, I'd barely remember to eat*. I'm not joking. I actually have an item on a list that says 'drink water'. Hmm.

* Okay, that's a lie. I never forget to eat chocolate.

Buy the book at a local bookshop (go on), or splash out on the first, limited edition at Unbound. Or there's always Amazon...