Other stuff : Christmas (and an apology) 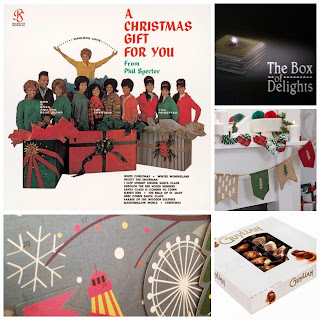 On second thoughts, I think I might be doing us all a favour by writing about Christmas.

I am more excited about Christmas this year than usual, and I'm usually quite excited. It's got something to do with celebrating it in a lovely new house which already has something quite Christmassy about it (it's old), and to living in a village (well, alright, it's part of Londonish, but you know, it likes to think of itself as a village, as does every other slightly gentrified part of London) that would look really pretty under a blanket of snow (because that happens around every December 25th, right? And when it does, I don't ever complain about how hard it is to get around. Oh no.)

But it'll also be Cub's second Christmas, and the first where I think she'll actually understand enough to get swept up in the excitement and the decorations and the music- oh, the Christmas music- and yes, okay, the presents. I am also predicting that it'll be the one day of the year when she has a lie-in but I'll be awake and up by 6; that she'll manage to pull half the decorations off the tree and attempt to eat them; that she'll open at least one present that isn't hers and snaffle a few grown-up chocolates without anyone noticing. I just hope the tree manages to stay standing and that she stays off the mulled wine. And that she only steals a few chocolates. Without vomiting.

So here are some- perhaps slightly alternative- things I am excited about this Christmas...

1 : A Christmas Gift For You from Phil Spector
Yes, I admit it, I love Christmas music. Keep your John Lewis ads, the tunes are where I'm at. I love Last Christmas and Do They Know It's Christmas. I am a sucker for proper Christmas carols. But this album is my Christmas earworm of choice. I like to think it's cool because it's Motown but actually I know that anything I think is cool becomes, by definition, not cool at all. (As a bonus extra, may I also recommend Sufjan Stevens's Christmas In The Room as a particularly lovely Christmas tune.)

2 : The Box of Delights
Husband thinks this is part hilarious and part awful- look, it was made in about 1984 so yes, the 'special effects' are, erm, special. But I remember watching this when I was seven and it still makes me all excited about Christmas. Just the theme tune is enough to send a shiver of anticipation down my spine. Two years ago I wrapped all my Christmas presents whilst watching this on repeat. And then I discovered from Twitter that Simon Pegg did the SAME THING. So it's cool. Okay?

3 : Bunting (and garlands and lights)
I seem to have concluded that our lovely house- with a wooden-floored hallway and proper staircase and wooden beams and all- calls for an overhaul of our years-old Christmas decorations from Ikea and Woolies. This is obviously just an excuse for some retail therapy, but I'm going with it.

So this year the Christmas tree will be colour-coordinated (get me) in silver and blue and bronze, and we're even going to have stockings on the fireplace, and bunting. Yes, bunting. I've never even thought of bunting before, never mind actually had any. And garlands. With little twinkly lights. And a wreath for the front door. If I could get away with putting them all up right now, I would. (The bunting in the picture is by Ginger Ray, who sell lots of lovely vintage-style Christmas and party decorations).

4 : Guylian Chocolate Seashells
Most people's Christmas sweet treat of choice might be a moist fruity marzipan-and-icing laden Christmas cake; or a boozy Christmas pudding; or perhaps just some buttery, flaky mince pies. Yuck. I hate dried fruit, particularly raisins, but I reserve most of my ire for fruit peel. So I'm not very festive when it comes to Christmas desserts.

In previous years we might make my mum's chocolate mousse (and as it turns out, also Delia's- recipe here), but what has ended up an unintentional tradition is my box of Guylian chocolate seashells. I don't eat them at any other time of year- and that's probably because at Christmas I tend to polish off a box in a day, maybe two, and then never want to see them again. Even now- early November- I'm not sure I can stomach the idea of them, but give me a month and I'm sure I'll be ready for the challenge.

5 : Advent Calendars
The thing is- and brace yourself for this- it's not the chocolate ones I love. When I was little I had one which had little plastic charms in it- they were probably terrible quality and I've no idea what you were supposed to do with them- but I loved it. And similarly I love advent calendars that- horror!- just have pictures. So this year Cub has an Oxfam pop-up picture advent calendar (which I can't find to link to online) and I am really looking forward to opening the windows with her each day. This is of course on the assumption that she won't insist on open all twenty-five on December 1st. Which she probably will. Loudly.

And for us? Well. I am wavering. Probably we won't have one- or maybe we'll have an advent candle, which Husband quite likes- but I have ummed and ahhed over the exquisite-looking Hotel Chocolat Advent Calendar for Two here. But you don't like chocolate advent calendars! I hear you say.