The Good, Bad and Ugly Stuff : May 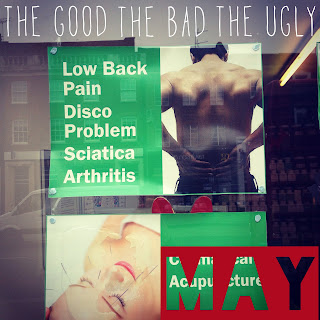 This is going to be a tough one. Whilst May has definitely had it's highlights- friends and family, as fabulously always- it has also been utterly pants at times, dogged as I have been by...

Much like my attitude to labour before I actually experienced it, I had no idea sciatica could be so freaking painful. To anybody who might once have told me they suffered from it and I did a concerned oh-dear-how-awful face before changing the conversation (I'm not sure I was ever that heartless, mind), I am truly sorry. Managing a bad back, a horribly painful right leg, a sometimes tempestuous toddler and a breastfeeding (read: no strong painkillers for you, mama) baby who of course does not come close to sleeping through the night has been bloomin' hard, and I am eternally grateful for the support and assistance of my family and friends. Without whom I would have cried a lot more and eaten far more chocolate to survive.

Still, it's starting to improve, which after two GP visits and having been massaged, acupunctured, acupressured, cupped and electrocuted (well, sort of) you'd hope so. Let's hope this doesn't feature next month.

So, there. That's the Bad bit done, and we'll just shove that as number one on the list and call a spade a spade. Moving on.

Well, praise be! Having searched for a recipe pretty much since I left primary school (just a few years back), I finally stumbled across one courtesy of a friend of Facebook. And my mum did the hard bit and made it. Apart from a small texture issue (and the helpful instruction to bake the pastry 'bland' instead of blind, ha) it was SPOT ON and made me extremely happy. Now, mum. Just a wee bit more practise and we are COOKING ON GAS. I wonder how you send a tart from Fife to London by post, though. Research required, I think.

Newborn babies are cute, yes, but they don't give a lot back in those first few weeks. Then comes the first sunny smile, like they have never been so pleased to see anyone as much as YOU. It's brilliant. And then, eventually, comes the first giggle, and Baby H managed that on a particularly tough painful day last week, and it was the best medicine. Cub was a particularly giggly baby so I'm hoping Baby H will follow suit- better than any painkiller. Mostly.

Cub is on a roll with speech at the moment. The sentences tumble out, and there is nothing funnier than toddler logic (mostly- see below). Since Cub claims to know the answer to any question, I have been teasing her a little; the square root of nine has so far been 'a little bit spotty' or 'acorn', depending on the day. She has, before, declared herself to be 'a little bit spicy' (I think we have a confusion between hot- temperature- and spicy). Last month she claimed her right foot was called Lisa and her left foot Luther. It's a neverending supply of giggles.... until....

Ah. The downside. That the seemingly sensible logic of 'if you've done a poo then we should change the nappy' completely fails and leads to giganormous tantrums; that we can't eat dirty bananas (even if it's just a mark on the outside) and we certainly can't eat a piece of banana that is too small or too big (you try finding that elusive sweet spot in the middle). That one moment she loves Cheerios; three seconds later she doesn't. I know she's not alone here. I hope it passes soon, but I've a sneaking suspicion we've a way to go yet...
Posted by sheena at 14:07

Email ThisBlogThis!Share to TwitterShare to FacebookShare to Pinterest
Labels: good stuff, may